Home » News and Features » An interview with Peter Marren 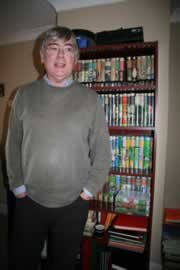 Hear from Peter Marren, author of The New Naturalists (1995) Nature Conservation (2002) and co-author Art of the New Naturalists (2009).
Interview by Tim Bernhard
What are your earliest memories of the New Naturalist books?
The first one I remember was Butterflies in the school biology library which struck me as different. When I had some money in my pocket after a holiday job I bought several titles, including Wild Orchids of Britain, Mushrooms and Toadstools, British Mammals and British Amphibians and Reptiles. At university several titles were virtually set books, but we bought them as Fontana paperbacks. The ones I fell instantly in love with were Wild Flowers of Chalk and Limestone and Mountain Flowers which I used for planning wild flower expeditions during my gap year. They were wonderfully readable and informative, and I was convinced that the authors had written them specially for me; thank you, Ted, Max and John.
When did you decide to collect the New Naturalists?
I don’t really regard myself as a collector – they are for use, not ostentation, as Edward Gibbon said of some oriental despot’s 101 wives. I bought them as I needed them; for example I remember buying Common Lands for a postgraduate essay I was doing. I did once own a nearly complete set (lacking only hardback Warblers) but by that stage I was filling in the gaps because I was writing about them and needed the books for quotations etc. I still use them regularly, almost daily, but when I needed money a few years back I cold-bloodedly flogged several of the more expensive ones, thinking I’d never need to write about the series again. How wrong I was.
How did you come to write The New Naturalists?
I gave a true but slightly dramatized account in my preface to The New Naturalists. Just luck really. If you call that luck. The NN board wanted to produce a 50th anniversary volume but wasn’t getting very far with it. Then Derek Ratcliffe joined the board, and, knowing of my interest in the series, he recommended me as a possible author. Even then nothing was done until I contacted Collins asking to have a look at their archive, and then someone remembered. By then I had less than a year to research and write it in time for the anniversary. Of course it helped that I had several published books under my wing already and so had some plausibility as an author.
Did you know some of the authors?
Yes, a great many. Michael Proctor was my mentor in field botany at Exeter, and I was lucky enough to spend a week at Monks Wood in its glory days when Kenneth Mellanby, Norman Moore, Max Hooper, Ron Murton and George Peterken were all there. When I fought the closure of Monks Wood a few years ago I was helped by a certain Ian Newton. My colleagues in the Nature Conservancy included Derek Ratcliffe, Morton Boyd, Adam Watson, Colin Tubbs, John Mitchell and Rosemary Parslow, with Max Nicolson as a sort of presiding demi-god. At odd times I’ve spent time in the field with Richard Fitter, Philip Corbet, Brian Davies and others; I met Ted Lousley and know Brian Spooner through mycology and a shared love of books, and remember a convivial evening with Chris Page. I co-wrote a book with Miriam Rothschild. It’s a small world, field biology and nature conservation. Unfortunately I am not old enough to have known the first generation of New Naturalist authors. I would have enjoyed interviewing E. B. Ford or Alister Hardy or Gordon Manley!
What is your favourite New Naturalist jacket?
Among Robert’s work I’ve always admired Ferns – bold and simple, with wonderfully harmonious patterns. For the Ellis jackets I find it impossible to choose one above the others. The ones they chose for an important exhibition at the Hayward Gallery were Trees, Woods and Man, The Rabbit and The Herring Gull’s World. Go figure. As I found when writing the forthcoming jacket book, it is hard to be critical and objective about such familiar things. The point about the jackets, Ellis or Gillmor, is their consistency. Where something falls short, it’s normally the fault of the printers, not the artists.
What do you think the future holds for the series?
Ten years ago I would have said it was running out of steam, but obviously not! This year promises to be an exciting one – print-on-demand, at least four new titles, our jacket book and the launch party, revitalized book club.
Will the next generation share our interest in such things?
They say New Nat Nuts are an aging population. But I think we’re clear up to number 130 or so. I’d like to see one about pond life, but more than the titles, I look forward to a renewed vitality in nature writing. The series can afford to loosen up a little and embrace good writing as well as good science.
Is there a book you would still like to write?
Yes, not quite played out yet. I have a book in mind about my own journey through nature but I’m not sure of its commercial appeal. Having enjoyed Bugs Britannica more than I’d expected to, I wouldn’t mind doing an anthology of ‘nature’, not just poems and writings but pictures, artwork, anecdotes, even jokes, anything from nature that ignites a creative spark in the observer. After that I’d be content to leave nature alone for a while if someone would be so kind as to offer me a large sum of money to write an amusing but reflective film script about Emperor Constantine or Warwick the Kingmaker or King Harold. I’d be equally happy to do nothing for at least six months apart from watching flamingoes and toucans in reasonable comfort, or hopping from one island to the next in some sort of sailing boat.