Home » News and Features » An interview with Mike Toms 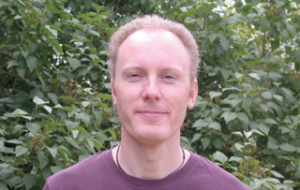 When and why did you become interested in owls?
I had a strong interest in natural history as a young child, stemmed in part by my nan’s connections with Gerald Durrell and Jersey Zoo, but this was largely focussed on small accessible creatures like insects, small mammals and amphibians. It was not until I was a little older that I became hooked on owls. I remember the day very clearly; I was on my paper round, cycling through the Surrey/West Sussex borderlands, when a Barn Owl flew low across the road in front of me. It was the first one I had seen and, abandoning the bicycle, I spent the following minutes enthralled by the way in which it quartered a roadside field.

Favourite owl species and why?
A hard choice, especially given that I have worked on Barn Owls for many years, but the Long-eared Owl wins the day. It has all the qualities that you’d expect of an owl but remains something of an enigma, a species that is heavily under-reported, difficult to study and with bags full of character.

Most fascinating fact that you unearthed in your research?
That an owl’s eye is positioned within a bone-like tube, something that virtually prevents an owl from moving the eyeball in any way. This means that owls cannot roll their eyes and goes some way to explaining why they can rotate their heads to such a large degree.

What’s one thing you could do to improve the owl population in Britain?
BOMP (the Barn Owl Monitoring Programme), which I helped to set up off the back of Project Barn Owl, shows what volunteers can do to for owls, improving our understanding of how their populations change and providing the information needed to support conservation action. If I could enthuse more people about owls and get them to get involved in monitoring and conservation in their local area then that would be a really positive thing for owls in Britain.

What is your favourite owl book?
Owls, by Chris Mead, which provides perhaps the most accessible and engaging account of the British owls for the general reader.