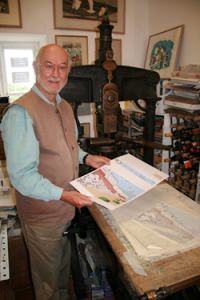 The stunning, specially commissioned cover images are one of the great joys of the New Naturalist series. Earlier covers in the series were designed by Clifford and Rosemary Ellis. Robert Gillmor has designed the covers since 1985 and continues to do so for each of the three volumes in the series published each year.
Robert Gillmor was born and educated in Reading and was greatly influenced by his grandfather, Allen Seaby, who was Professor of Fine Art at Reading University. Robert spent a great deal of time watching him in his studio, carefully printing his colour woodcuts. This was also Robert’s first introduction to the New Naturalist books as his grandfather had a painting of ‘Blackcock Lekking’ featured in the second volume of the series, British Game.
With a strong interest in birds and drawing, Robert spent a good deal of time bird-watching and studying bird behaviour in the various flooded gravel pits around Reading. He was an active member of the Reading Ornithological Club and, in 1949 while still a young schoolboy, illustrated the first cover of their Annual Report and has continued to design these ever since, (although now it is the annual Berkshire Bird Report). Robert’s first commercial use of linocuts was in 1958 for the cover of David Snow’s book, A Study of Blackbirds, for which he had done the line drawings. Around this time he became involved with annual RSPB film shows, brought to Reading by Frank Hamilton, a member of the Society’s tiny staff. Frank saw and admired Robert’s early artwork and this lead to occasional line drawings for society publications and covers for the film programmes, which in turn lead to covers for Birds Magazine and eventually Christmas cards. He also helped re-design the RSPB’s Avocet logo. 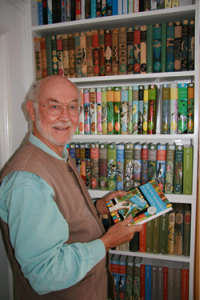 Robert also got to know the writer and broadcaster Tony Soper, whom he met in Reading whilst filming for the BBC television series ‘Out of Doors’. Drawings were soon commissioned from the BBC and also for Tony Soper’s Bird Table Book which was first published in 1965. This book became hugely popular and has gone through various editions. The striking original jacket design featured a Great Tit and a Great Spotted Woodpecker using a four-colour linocut.
In the late fifties, with the support of leading bird artists of the day such as Peter Scott, he organised ‘Exhibition by Contemporary Bird Painters’, which led directly to the founding of the Society of Wildlife Artists in 1964. Having spent six years teaching art at Leighton Park in Reading, Robert retired from teaching in 1965 when he found himself doing two full-time jobs. He was also becoming more involved with The Society of Wildlife Artists, of which he was the first secretary. In 1966 Robert became the art editor of the prestigious publication Birds of the Western Palearctic. He continued to illustrate over 100 books as well as work for the RSPB, BTO and his local wildlife trust. Eventually he returned to his great love for printmaking when he and Sue moved to the north Norfolk coast in 1998. Although Robert is one of Britain’s leading ornithological illustrators, he now spends nearly all his creative time printmaking with the occasional watercolour for a Poyser jacket and pen and ink drawings for the local bird reports.