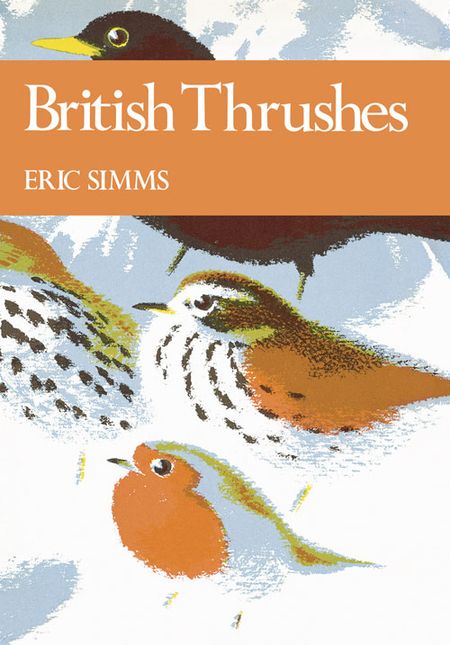 The thrushes are among the most ubiquitous of birds, as well as the most melodious. Eric Simms has written a lucid, highly readable and authoritative study of the group. This edition is exclusive to newnaturalists.com

There are six true species of thrush breeding in the British Isles: Blackbird, Song Thrush, Mistle Thrush, Fieldfare, Redwing and Ring Ouzel. It is to these that the major part of the book is devoted. The author deals with each species in turn, describing fully its general biology and ecology. There is then a discussion of various aspects of the natural history of the genus as a whole which, while presenting a very full picture of the lives of these fascinating birds, also succeeds in highlighting and discussing some of the most important current problems of avian biology.

There is a chapter on Britain’s vagrant thrushes and, finally, a substantial chapter on the seven species of small, chat-like thrushes of the British Isles – including such well -loved birds as the Nightingale and the Robin.

All native species, and many of the vagrants, are illustrated in the black-and-white plates. The wealth of maps, diagrams and other text figures attests to the depth of Eric Simm’s research. The book is enlivened throughout by the line drawings by Robert Gillmor, as well as by the author’s considerable skills as a writer and broadcaster.